I'll grant you that Tech is important in our day-to-day lives. I'm using it right now to post this message. But sometimes Tech is silly and contradictive of itself and navigates too willingly to the darkside. Here are a few examples that come to mind; 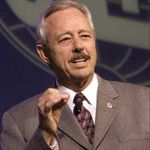